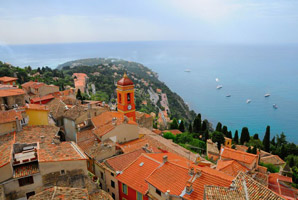 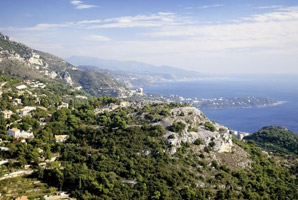 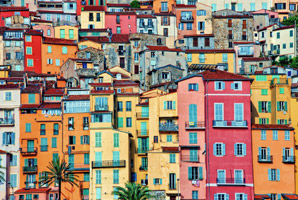 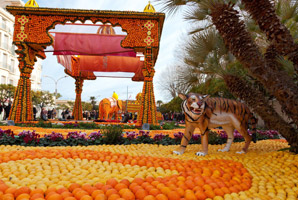 Menton is a destination that is becoming more valued by an increasing number of international visitors.

After the French, it is logically the Italians who visit the most, followed by the English and German. A new phenomenon is that the visitors are coming from increasingly greater distances, from North America, Russia, Scandinavia, Southeast Asia... The Japanese, for example, have a weakness for Menton, and for them the ‘must’ is to come here to celebrate their union : great admirers of Jean Cocteau, they love to confirm their union, in the Salle des Mariages (Wedding Hall) of the Town Hall decorated by the artist.

“Old Menton with its steep tiers of houses huddled one on top of the other, its mysterious myriad of rippling patches of light and dark, its sudden flashes of sun and of blue church towers, all projected against the velvet opalescence of the mountains.”
Octave Mirabeau (1848-1917).

A natural stronghold
Menton is a small town once cut off from the world, encircled by walls pierced at each point of the compass by gates - once carefully guarded. Here, the streets and alleys are dark, winding and often vaulted ; they follow the contours and are linked together by narrow passages leading down to the ancient Roman road, the present Rue Longue.

The ramparts
Gates pierced in the ramparts linked the city to neighbouring states. To the north, the gate of Jean II led to Castellar ; to the south, a gate allowed the inhabitants to go to the Val de Menton ; to the east, the Via Julia Augusta entered through the gate of Saint Julien and to the west, the gate of Saint Antoine gave access to the district beyond the walls, called “Cap Saint Sébastien”. Skirting the sea, a cluster of tower-houses, still to be seen, protected the town.

The castle of Menton
The original castle of Menton was built in the late 1240 s. During the wars between Provence and Genoa and the quarrels between Guelph and Ghibelline, the Genoese led by Ansaldo Spinola besieged Menton in May 1274. The caste was badly damaged and had to be pulled down. With the Comte de Provence’s aid, Guillaume Vento, Seigneur of Menton, had a new castle built which subsequently suffered badly from the rivalry between the Mentonese and their seigneur. It was besieged in March 1477. From 1497 onwards Jean II undertook its restoration committing the work to Philippe Carlone. The site of this final castle became the cemetery after 1808.

Gardens of Menton
"My city is a garden"
The slogan for the city was not chosen at random ! With an exceptionally mild climate and 316 days of sunshine a year, Menton is a paradise for botanists who have aclimatised exotic plants brought from far away trips. The sub-tropical species flourist and grow at ease in Menton.

Besides it’s exceptional public gardens such as La Serre de la Madone, Maria Serena, Val Rahmeh and Fontana Rosa, the novelists garden, or the private gardens such as the "Colombières" or the "Clos Peyronnet", Menton posesses hectares of green spaces such as the magnificant olive trees in the "Parc du Pian", the "Plateau Saint-Michel" and the"Ubac" urban forest.

The urban gardens such as the "Square des Etats-Unis", avenue Carnot, the "Campanin" gardens or the "Quai Bonaparte" are a recent creation in the city.

Roquebrune Cap-Martin
Overhanging the coastal village, the medieval village of Roquebrune appears to be standing guard. The drawbridge has long since disappeared, instead a stone bridge built in it’s place brings you over the donjon of the old fortress castle. The rampart walk is spectacular.

Climbing the steps upwards you are confronted with original arches, forged iron and charming little squares, all adding to a most pitturesque walk. On the road toward Menton one can find a 1,000 year old olive tree.

Right at the Bottom of Roquebrune, the walk continues to the sea front around Cap-Martin and to the discovery of the famous Corbusier chalet and other such incredible luxury properties.There are many hiking opportunities to take advantage of an exceptional natural setting and discover the main elements in the local heritage. Some examples:

From Carnolès to the gates of the Principality of Monaco on the coastal trail(views of the fort of Cap-Martin, the Belle-Époque villas on Cap-Martin, Le Corbusier’s “Cabanon” and Eileen Gray’s villa).

Around Mont-Gros from La Coupière(pristine flora and fauna near the old castrum of Agerbol, many traces of ancestral farming activities around springs, ponds and irrigation systems)

The Commune has many churches and chapels: Saint-Joseph church at Carnolès, Sainte-Marguerite church in the village (on the Route du Baroque), Saint-Roman church, Saint-Martin-du-Cap church, a fine example of modern architecture of the 1970s, Saint-Roch and La Pausa chapels at the gates to the mediaeval village, or Bon Voyage chapel on the Moyenne Corniche.

Other monuments attest to human occupation for a very long time:
- Grotte du Vallonnet(1 million years) - Because of on-going excavations, the site is not open to visitors.
- The tomb of Lumone on the old Roman road, Via Julia Augusta (across from the Mairie).
- The Castle, a rare example of Carolingian architecture in the mediaeval village
- The fort on Cap-Martin, on the Maginot Line (1930), had a crew of over 300 men
- The architect Le Corbusier’s “Cabanon”, a modèl of minimum habitat applying the Modulor’s proportions (Promenade Le Corbusier, visits by reservation only)
- Eileen Gray’s Villa E1027, emblematic of 20th-century architecture (restoration underway, not accessible to visitors).

Château Grimaldi Roquebrune Cap Martin
Built in the 10th century, it was originally the dungeon of a fortress encompassing the entire village. A medieval atmosphere on all floors : ceremonial hall, guard room, seigneurial residence.Panoramic view of Monaco, the sea, Cap Martin and the village.

Beausoleil enjoys excellent sunshine and a microclimate with pleasant temperatures all year round. Located in the city centre, ten minutes by foot from the beaches, five minutes from the famous Place du Casino de Monte-Carlo, and 1h30 from winter sports resorts, this is an ideal getaway.

Cap d’Ail :
Cap d’Ail has a privileged location on the French Riviera as the gateway to Monte Carlo, just 15 minutes from Nice and from Italy.

With its beaches and quiet inlets, its mild Mediterranean climate and the beauty of the neighbouring peaks culminating at some 500m above sea level, Cap d’Ail is an attractive seaside resort for single individuals, couples or the entire family.

The Sentier du Littoral de Cap d’Ail allows you to explore the flora, geology and architecture of its Belle-Époque villas.

Panoramic trails
These trails open onto a grandiose landscape overlooking Cap d’Ail and the Principality of Monaco. They are home to vegetation which enjoys an exceptional climate tempered by the Mediterranean shores.

Monuments
- Château des Terrasses: built ca. 1890 for the British banker William Mendel in a leafy 2,000m² park, Château des Terrasses offers an exceptional view. He had his hour of glory when, in 1895, Grand Duke George Alexandrovich, brother to Tsar Nicolas II, rented the villa for the winter.

Acquired by the Municipality in 2006, Château des Terrasses was perfectly restored, its rare comfort and beauty give visitors the impression of discovering a precious jewel enriched by the patina of the years.

The Château can be used for organising various events. The terraces, garden and two reception rooms can host conventions, promotional event or private receptions in a modern luminous Belle-Époque setting, open on the Mediterranean.

- Notre-Dame-du-Cap-Fleuri church : Notre-Dame du Cap Fleuri was designed by the architect Paul Chevalier and consecrated in 1910, at the instigation of the Canon Sajot. The nave is neo-Gothic in style.

The cross and Christ above the altar date from the 17th century. The ten stained-glass windows representing Saints were blessed in 2001.

Our properties on Cap d’Ail